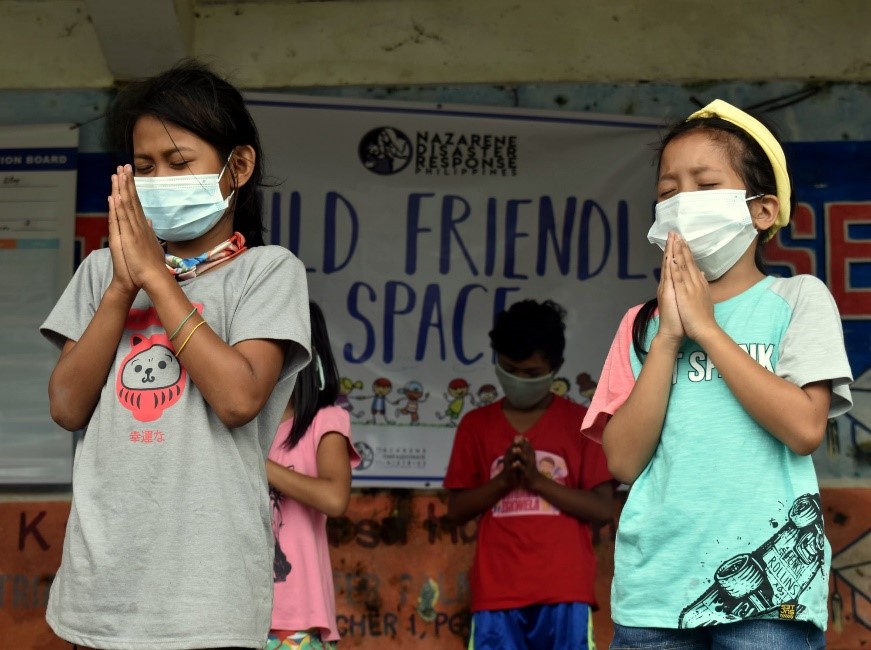 The first step after a natural disaster is to assess the damage, the people, and the resources at the scene. With limited resources, our NCM-Philippines team, led by pastor Jem Mortega of Legazpi Church of the Nazarene and guided by Leody Echavez, NCM Coordinator, conducted an impact and needs assessment after Typhoon Rolly (Goni) hit the Region of Bicol on November 1, 2020.  This storm came soon after Typhoon Molave (Quinta), which caused widespread damage in the Philippines and Southeast Asia in late October. An initial assessment helped NCM-Philippines to see the extent of the devastation. Drinking water was scarce, power was out in many areas indefinitely, and evacuation centers were over-crowded.  In many areas, 80% of the housing was destroyed. Aid in the form of food packs was flooding in, but there was still a need for bedding, medicine, face masks, toiletries, alcohol, sanitary pads, and soap. The NCM team also noted that there were no Child-Friendly Spaces set up or psychological first aid in most of the communities. On top of all this, the risk of human trafficking increases after natural disasters like these. 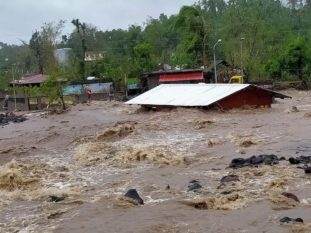 The NCM-Philippines Disaster Response team registered with the Incident Command Center of the province of Albay.  After this visit to Bicol, they determined the least serviced areas and issued a call to action for the Church of the Nazarene in the Philippines.

After a week of donations, the team loaded trucks and vans to travel to Bicol to establish child-friendly spaces in three evacuation sites that cater to almost 600 children.  “Children are oftentimes the most neglected demographics during times of disaster. All are affected, but the children’s needs are overlooked because there are few organizations that focus on children. This is where NCM comes in as a child-focused ministry.” Echavez said.

NCM also distributed food packs to selected evacuation centers that had previously been neglected.  Midway through the week the team experience yet another Typhoon as Ulysses (Vamco) roared through the island of Luzon, dropping extreme amounts of rain on an already water-soaked island.

Still, without electricity, the team made plans for relief efforts in Manila, where the rain had produced extensive flooding. As the week wrapped up NCM continued to assess Tropical Storm Ulysses’ impact, continued to establish child-friendly spaces, and procured relief items that were still the mission.  The team has now returned to the Manila area but the work of Disaster Relief continues.

There is now news of more devastation in Manila.  Shechem Children’s Home, Inc. (NCM) was flooded, and the children and staff were evacuated to a safe location.  There will be a cleanup in this and other locations.  There was also damage to the campus of the Asia Pacific Nazarene Theological Seminary, where large tree branches fell.  Philippine Nazarene College in La Trinidad, Northern Luzon, suffered extensive damage to their men’s dormitory, caused by a large overturned tree.  These are just reports of damage in the facilities run by the Church of the Nazarene. The damage within the greater community is far more extensive and is still being assessed. 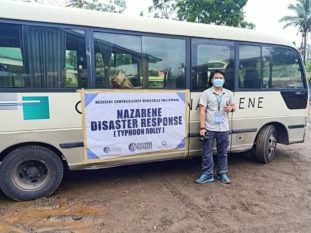 Finally, the Cagayan Valley, which catches flow from the mountain ranges in northern Luzon, has experienced extensive flooding as well. There have been massive flash floods and many communities are underwater.  Much of this flooding occurred at night when the coast guard and the helicopter pilots were unable to assist. The cost in human life has been considerable, especially among children.

The NCM team asks that you continue to pray for the Philippines.  There are many areas that have been affected by these three storms in less than one month. Pray for resources to assist those who have lost much. Pray for safety for the Disaster Relief teams from the five affected districts as they go out to serve these hard-hit areas.  Pray that the Church of the Nazarene would be a beacon of God’s love to the communities in which they serve.  Pray that dams will hold, that people will not panic, and that peace will come to many through faith in God.

If you would like to donate to the relief efforts for these storms, you can do so here.