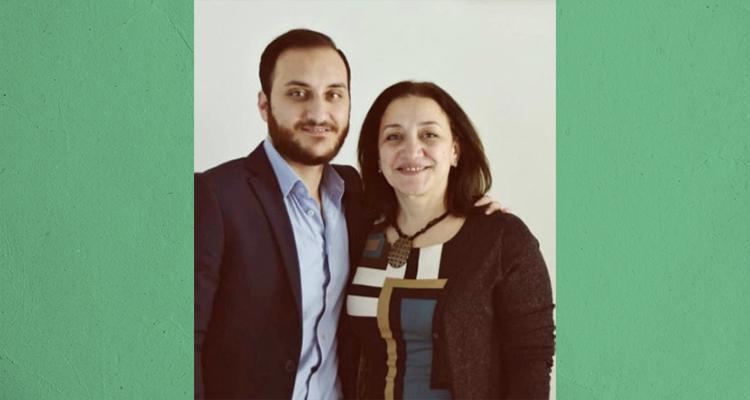 Lena*, Nidal*, and their son Rafi* were involved with a local Nazarene church in Syria when the civil war threatened to take their son. When they fled to Poland, along with hundreds of other Arabic-speaking refugees, they met Nazarene missionaries who connected them with the Nazarene church there. The family now says they understand that this is where God wants them.

In 2005, Lena joined the teaching staff at the Nazarene primary school in their city in Syria. The pastor who worked in the school invited Lena to attend a Sunday service at the Nazarene church. The teaching she heard there helped to deepen her understanding of and relationship with God.

“I saw that this is what I’m looking for,” she recalls. “I wanted this, so I started to come. My sons also came with me.”

The young men, Rafi and Wadi, loved attending the church. The family joined a Bible study, volunteered in various ministries, and became members. Rafi played the piano for worship.

When the civil war began, their city was spared much of the fighting. Rafi continued working at a fast food restaurant, Lena still taught at the school, and church life went on as usual. But even so, sometimes bombs fell in the city.

One day, Lena was at the church when Rafi stumbled into the building covered in soot and debris, his clothing torn. Lena screamed in fear until Rafi assured her he was unhurt.

“Mom, I’m good, nothing happened to me,” he insisted. He had been at his job to open the fast food shop when a bomb exploded nearby.

The closest bombing happened across from their home. Lena had already left for work but her sons were still in bed. A rocket fell on the building opposite their home, causing a deafening explosion and rocking their house.

“When I opened my eyes, I thought, ‘I will not see my brother or anything. I will be in heaven,’” Rafi recalled. But both young men were safe and unharmed yet again.

Lena said the family lived with constant stress caused by the threat of recurring attacks.

“We were not afraid, because we know God will protect us and provide everything for us,” she said. “But, when you heard a lot of bombs or see a lot of things, you always feel stressed.”

Refugees from the harder-hit areas poured into the city. The church began a ministry that provided food, clothes, household supplies, and heating in the winter. Church members visited families to comfort them, listen to their stories, pray for those who were willing, and help them resettle in the city.

When the stress of the bombing became too much, Lena and Nidal decided it was time to leave the country, taking Rafi with them. Wadi stayed behind with his family and settled in another city. Later, Wadi became a pastor and now leads a Nazarene church there.

Nidal and Lena’s journey took them to Poland, where Lena’s brother lived. Most who travel to Poland continue on to Western Europe. They believed their time in Poland would be temporary, that when the war ended they could return home. While they waited for their asylum papers to be processed, Nazarene missionaries in Poznan heard the family was there. They went to visit them, and soon after the family began attending the Nazarene services there.

“We came to Poland with about 150 people,” Rafi said. “Most of them have gone to Germany. But we decided to stay here because God sent us here. He wants us here. He has a plan for us here.”

This story is adapted from a Where Worlds Meet article.

--Church of the Nazarene Eurasia Region