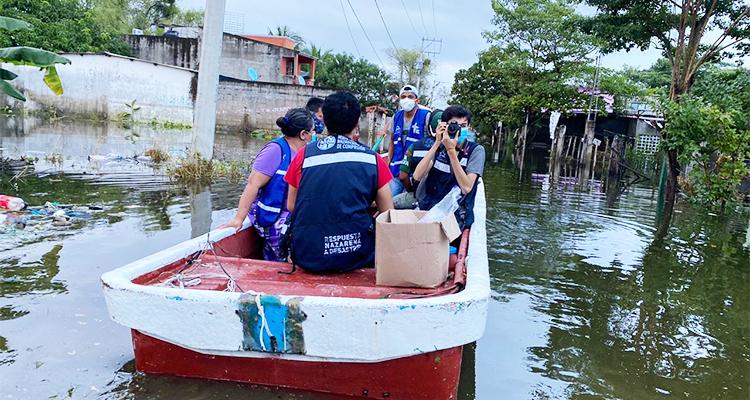 Hurricanes Iota and Eta have both swept across Central America in the last two weeks, causing destruction from southern Mexico to Panama. At least 30 people have been killed, though the count may rise after mudslides and extremely severe flooding.

The storms were both Category 4, and Hurricane Iota is considered the strongest Atlantic storm this year. Hundreds of thousands of people who evacuated to shelters before the storm now also face the tertiary risk of COVID-19 infection.

Local Nazarene churches have mobilized to respond in a variety of ways; at least 24 churches opened their doors to serve as shelters and others are serving as collection centers. Nazarene Theological Seminary in Guatemala City is also collecting donated relief items. Many communities across Central America experienced severe flooding that completely destroyed families’ crops. The Nazarene church will continue to assess the situation to determine how to continue helping families.

A team of nine Nazarene staff members visited seven shelters in Guatemala to distribute more than 1,300 crisis care kits. They also provided a puppet show for children, medicine, clothing, and blankets. The Church of the Nazarene in Campur, Guatemala, was completely submerged, incurring damage that likely won’t be reparable.

In Nicaragua, many rivers overflowed after Hurricane Iota. Many homes were destroyed, and teams of Nazarenes are waiting for the waters to recede to deliver relief goods to areas that are still isolated. At least 11 Nazarene churches are hosting or enabling shelters, and one Nazarene businessman provided a warehouse as a shelter as well. The superintendent of the North District reported that one church is gathering a team of 15 people to respond to any emergencies, and they are preparing two warehouses to be shelters. The city gave the team boats to use if they are called upon to begin rescue efforts.

The Nazarene mobile medical brigades in Mexico have also been responding in flooded areas in the state of Tabasco. The church sent hygiene kits, organized food pantries, and prepared food for those who were evacuated or homeless.

In Honduras, Iota caused widespread power outages and flooding, which has cut off several communities. In the Central South East District, one community is completely destroyed, including the Nazarene church. Early assessments indicate the church may not be able to be rebuilt. Nazarenes in El Salvador, which shares a border with Honduras, are collecting relief items and offerings to send to the impacted districts.

“We visited a community that had not received very much help,” she said. “We had the opportunity to pray for an older gentleman on the side of the road, and he was praising Jesus for being alive. When we returned from our short walk, the rest of the people were already lined up ready to receive what we brought.”

How You Can Help

Pray for those who have lost loved ones, and pray for those facing the loss of homes, livelihoods, food sources, and community. Pray for the church as they support people now to reduce further displacement later. Pray for the months of recovery ahead, when developing resilience will be key. Pray for those who are most vulnerable during and after the storm, especially senior adults, individuals with disabilities, and people living in poverty. Pray for church leaders and churches responding to the needs around them. To send a prayer or note of encouragement, go to ncm.org/pray.

Churches and individuals around the world can provide support through the 2020 Storm Response. Donations will be used for immediate needs, such as water and food, as well as long-term recovery and rebuilding efforts.

In the U.S., make checks payable to "General Treasurer" and send them to:

In Canada, make checks payable to "Church of the Nazarene Canada" and send them to:

For any other country, give through your local church or district, designating your gift to 2020 Storm Response.