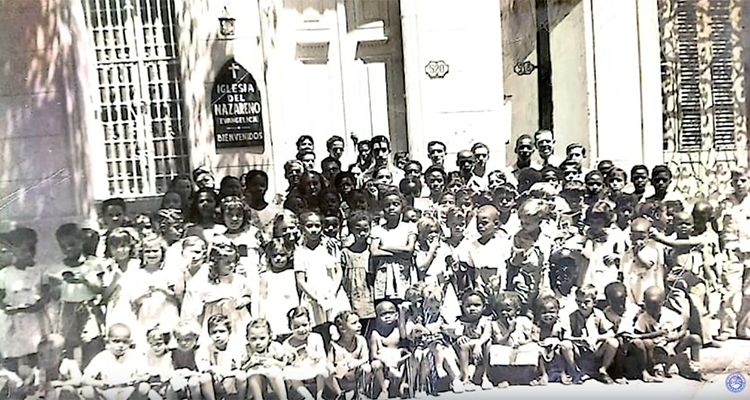 The Church of the Nazarene in Cuba celebrated its 75th anniversary on 26 May. The celebration, held through YouTube, reflected on the denomination’s humble beginnings in Cuba.

The superintendents of both districts in the country, Luis Batista (East District) and Leonel López Ortiz (West District), participated in the celebration, which included regional and global leaders who gave messages and motivational words.

Among them were the field strategy coordinator, Carlos de la Cruz, Mary and Paul Jetter, and Robert Prescott, whose father, Lyle Prescott, was a former missionary to Cuba. Robert recalled the first service held in Cuba on 26 May 1946, when he was 8 years old, and the first sermon his father preached in the presence of 10 or 12 people.

The Church of the Nazarene established a presence in Cuba through a group of missionaries who arrived at Puerto de Casilda in Trinidad on the southern coast of the country. In 1902, Leona Gardner began a mission in Trinidad. For 25 years, she preached to Cubans, trying to establish the church in Cuba.

Years later, H. F. Reynolds, general superintendent emeritus of the denomination, mentioned some of the struggles and trials Gardner experienced.

“It was my desire to close our work there, but she wanted us to give her another chance,” Reynolds said.

In May of 1927, Gardner was assigned as missionary to Guatemala by the General Board. Eighteen years later, on November 10th, 1945, Lyle Prescott and his family were transferred to Cuba. Wanting to recover Gardner’s work, he and his family traveled by train to Trinidad. After three months there, Prescott decided to establish the Centro Misionero (Missionary Center) in La Habana (Havana). It was there, on May 26th, 1946, that they began a Sunday school in their living room.

“We Cuban Nazarenes today are thankful for that second chance,” López said.

After seven years, in 1952, the report was truly encouraging— 82 churches, 26 Sunday schools with 600 participants, and an average attendance of 450 people. By this date, the Nazarene Bible Institute had begun with 16 students in Barrio de La Chorrera, on La Calzada de Managua, Arroyo Naranjo, in La Habana. There were six foreign missionaries and 11 national ministers.

After the Cuban revolution on 1 January 1959, the North American missionaries had to leave the country little by little. On 30 October 1960, the last missionaries left a note on the dining room table at the seminary with the names of the national leaders who would form the Emergency Committee to continue directing the church. Soon after, for the first time in history, a Cuban, Pedro “Hildo” Morejón Millians, became superintendent.

“Many [people] overseas didn’t see a future for the church in Cuba and knew nothing about the Nazarenes on the island, thinking the church had disappeared, but it wasn’t so,” López said, adding that with little experience but great passion for God’s work, they did not give in and took charge of carrying forward God’s work, trusting in His promises.

“Today, 75 years after having begun this evangelistic and missionary journey, in an unimaginable pandemic, we Cuban Nazarenes pray that God would help us preach his Word every day and evangelize Cuba, holding fast to our essential values as a denomination.”

The church in Cuba is in the process of organizing a third district in the far east of the country. There are currently 149 churches and mission-type churches with around 11,000 members in full standing and associated.

“On this anniversary, we thank God because the Church remains, its members continue being faithful, and its mission remains active, even in difficult times such as this worldwide pandemic,” López said. “Our commitment is this: to continue being like Him and making Christlike disciples in Cuba and all nations.”